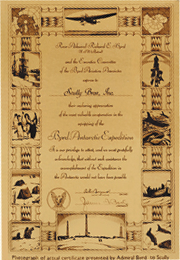 Scully dates back to 1906 and is proud of
its history, which includes the manufacture of
flight jackets and helmets for pilots in WWl and WWll.
When Admiral Byrd embarked on his expedition to the Antarctic,
the explorers were outfitted in Scully gloves and jackets. Scully's
involvement in historical events has resulted in the display of several
items in the Smithsonian Institute, as well as the Museum of Flight in Seattle,
Washington. In its 113-year history, Scully has been well known for the manufacture
and distribution of a myriad of leather products including jackets for men and women,
handbags, business accessories such as briefcases, agendas, binders, portfolios, as
well as leather travel accessories including luggage sets and other travel-related
items. Over the course of its 113 year history, Scully has expanded its product
divisions to include Honey Creek, the Cantina Collection, and its old west
offerings...Wahmaker and Rangewear.

Scully is a founding member of M.A.G.I.C., which has now
become the largest apparel show in the world. Today, Scully attends a myriad of
tradeshow events throughout the United States and maintains permanent showrooms
in Denver, Dallas and Atlanta. Scully products are found in over 3,000 stores
throughout the world, as well as a growing number of websites relating to
these enterprises. Scully is well into its second century and fourth
generation. We are proud of and appreciate our heritage
and look forward to another hundred years.